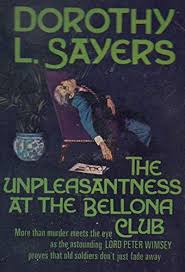 My introduction to Dorothy Sayers was the dense but ingenious The Nine Tailors, a book I might not have the fortitude to finish nowadays. Although it presents a witty, entertaining detective and an absolutely brilliant murder weapon (maybe the best I’ve encountered), TNT also has an unbearably tedious account of campanology. I still don’t know how I got through it–probably Sayers’s reputation forced me to keep reading. Once I got past the beginning, I enjoyed it just fine.

It was the dread of encountering a similar ejaculation of boring minutia that had prevented me from making a second climb onto Mount Sayers. I am happy to report that The Unpleasantness at the Bellona Club is light on its feet with smart characters and (best of all) nearly 90% dialogue.

The Problem: General Fentiman is found dead of heart failure at the Bellona Club. The body is found slumped in a chair by our detective, Lord Peter Wimsey. Due to Fentiman’s age, there is no suspicion of foul play. Only…well, it’s just that no one remembers him arriving at the club. A week later, Wimsey is hired by Fentiman’s two sons, George and Robert. It seems that (bear with me) Fentiman’s sister also died around the same time. Due to the nature of the two wills, the delicate matter of who died first is worth millions of pounds to the two sons. Wimsey’s job is to pinpoint the time of death, preferably to the very minute.

The Investigation: We spend most of the story following Wimsey (with one very good exception) as he charms his way to the truth. He’s quite similar to Vance, cultured but able to engage in sporting fisticuffs if need be. The brothers are on opposite ends of the bracket. George suffers from shell shock and must live off his wife’s salary, making him a prime suspect at various points in the novel. Wimsey needs to find out how much George knew about the peculiarities of the wills. Robert may be guilty of some serious evidence tampering. The reason why becomes terribly important as the investigation hits the midpoint. Fentiman’s doctor, Penberthy signed the death certificate, but noticed an irregularity about the stage of decomposition. Perhaps the old man died at another time and place. We’re treated to lots of early 1900’s science, but it’s boiled down to digestible concepts.

The Solution: This is not an impossible crime by any means, so there’s no grand reveal, but rather a slow, methodical march to the truth. My favorite chapter is the questioning of Ann Dorland, the dead sister’s companion and the key to the mystery. Her awful artwork ends up leading Wimsey to the correct plot. (Note to the ghost of Dorothy Sayers–You name the sister Dormer and her companion Dorland. They are often mentioned in the same paragraph. Do not come back to life and do this again. It’s maddening!) We end on a bittersweet note of honorable reckoning that I saw coming about four chapters too soon.

This is not a brilliant mystery by any means, but it’s guided with a firm hand and a clear understanding of character. The dialogue is witty and you’ll have a good time reading it. I’m not sure which Sayers to try next, so if anyone has a recommendation, I’m all ears.

I'm a murder mystery/impossible crime fanatic. I like locked rooms, footprints in the snow, missing murder weapons, and unreliable suspects. My first novel, Goodnight Irene, was meant to evoke the great detective stories of the past. Last year I published my second novel, The Opening Night Murders. In 2020, I will release The Strange Case of the Barrington Hills Vampire upon the world. View all posts by jamesscottbyrnside

8 thoughts on “The Unpleasantness at the Bellona Club”