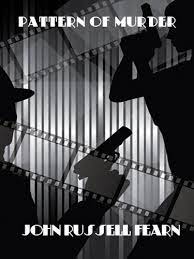 John Russell Fearn's Pattern of Murder is a fiendishly clever crime novel with a murder weapon and method so delightful that I forgive it for being inverted. It's well-written in the sense that it moves. Fearn doesn't care about painting a picture or demonstrating his vocabulary. He's a got a singular world (the inner workings… END_OF_DOCUMENT_TOKEN_TO_BE_REPLACED

That's the title of my next book. I'm not sure if it will be Macaque! (2022) or Macaque! (2023) but it's coming soon. As usual, I have veered wildly from my plans. I had wanted to do short stories, but one of the outlines interested me so much that I can't focus on much of… END_OF_DOCUMENT_TOKEN_TO_BE_REPLACED

It's a common murder-mystery tactic - isolating characters in one place. Yes, authors employ this device to ratchet up the panic and tension, but I suspect their main reason is to prevent the victims/suspects from simply leaving. "What's that? There's an unknown murderer in the house? I know! I'll drive to New Jersey, change my… END_OF_DOCUMENT_TOKEN_TO_BE_REPLACED